Two different technologies are being explored by the EST scientists and engineers for integral field spectroscopy. In this article, we cover the microlens arrays currently being developed by the Max Planck Institute for Solar System Research. 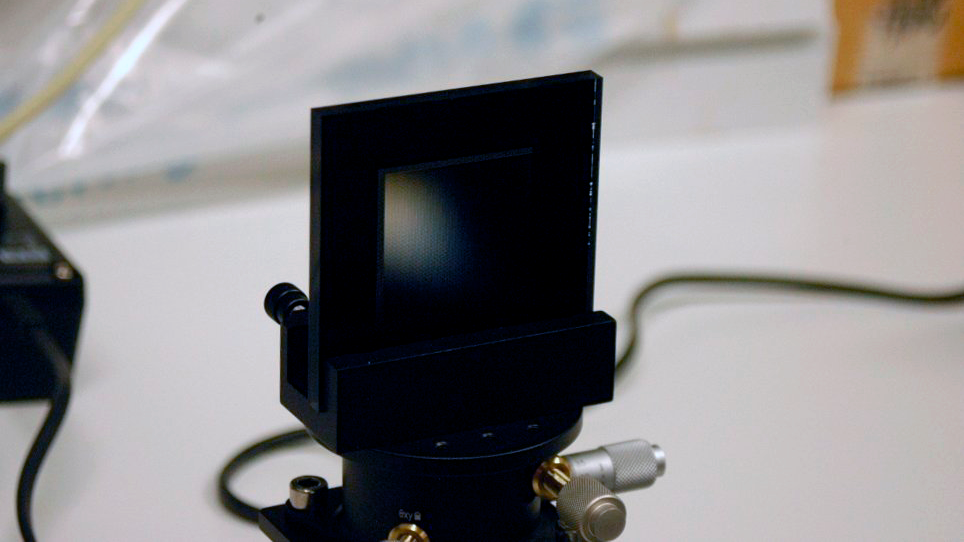 One of the microlens arrays being developed by the MPS

As explained in a previous article, the European Solar Telescope will heavily rely on Integral Field Units to get 3D multi-wavelength capability.

These instruments (also known as IFUs) can extract both spatial and spectral information of the Sun with just a single exposure. This will allow scientists to study very fast phenomena (like waves or magnetic reconnection) with no time evolution during the scan, as it is the case with other instruments.

In a nutshell, IFUs provide simultaneous spectra of a whole solar region by dividing the field of view in several segments that are later reordered and fed to the slit of a classical spectrograph. This technique is called integral field spectroscopy and results in a datacube containing a 2D image with spectral information added (so scientists have x, y, and wavelength).

To segment the original image, two different technologies are being explored by the EST scientists and engineers: image slicers and microlens (or lenslet) arrays.

Whereas image slicers divide the image in slices that are then fed into the spectrograph (as explained here), microlens arrays work similarly to the compound eyes of arthropods: they re-image every pixel (resolution element) to a smaller area. The resulting sparse image is then fed to the spectrograph, whose dispersion angle is adjusted to minimise the mixture of spatial and spectral information. In this way the spectra of all resolution elements are accommodated in the detector, without overlaps. Clearly, very large detectors are needed to achieve that goal.

The development of microlens arrays for the European Solar Telescope is led by the Max Planck Institute for Solar System Research. The configuration they are working on is based on double-side microlens arrays made from an optically transparent material and containing a straylight mask, a configuration that works from the infrared to the near ultraviolet.

Of course, for this to really work out, a very fast cadence in acquiring such images is needed: “EST will be a large aperture telescope, with high resolution and able to observe phenomena on very small scales”, explains Michiel van Noort, from the Max Planck Institute for Solar System Research.

“This means that EST will require a very high cadence to limit the effect of the solar evolution on the spectra [that is, to capture images of very small structures faster that the speed at which they change]. The higher the cadence, the less time there is to collect photons, so EST will also need high photon efficiency", he continues.

Current prototypes and next challenges

The team has already installed a prototype at the Swedish 1-meter Solar Telescope, called MiH1. There is also an infrared version of that same instrument, called HeSP, which will also be installed at the SST. A larger and more tunable version is currently being developed.

However, those prototypes are still not enough for the EST, and many optical, calibration and data handling challenges lay ahead. "The gratings used in existing solar spectrographs yield too high spectral resolutions", van Noort explains. "The spectral range is therefore too small, and it is at present not enough to capture the really high velocities that occur on the Sun", he concludes.