Polarimetry is a key method to characterize solar magnetic fields. Unfortunately, light not only gets polarized in the presence of a magnetic field, but also when it is reflected obliquely in a mirror. This means that the very own mirrors of a telescope can introduce additional polarization that could mask the one coming from the Sun. To avoid this, EST has been designed in such a way that the placement of the mirrors compensates for the extra polarization they introduce, effectively making it the first large solar telescope free form instrumental polarization. 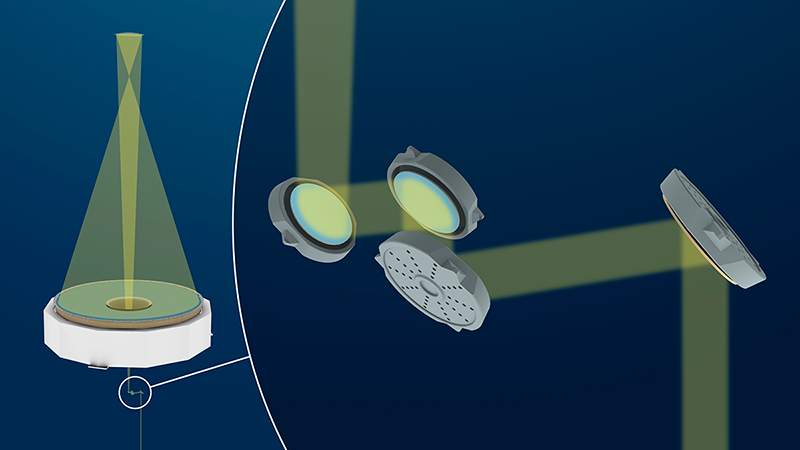 Recreation of the EST optical path, in which each mirror is paired in such a way that its reflection matches that of its partner, effectively cancelling out instrumental polarization.

Magnetic fields —or, more accurately, the interactions between them and solar plasma— are responsible for everything that happens on the Sun, from sunspots to coronal mass ejections. Understanding them is key to unravel not only the inner workings of our star, but also its influence on interplanetary space.

"Depending on the direction of the polarization -linear, circular, elliptical- we can actually determine whether the magnetic field is oriented towards or away from us and whether it has some inclination in relation to us", explains Manuel Collados, coordinator of the European Solar Telescope.

Unfortunately, light not only gets polarized in the presence of a magnetic field: it also polarizes when it is reflected obliquely in a mirror; and the more oblique the reflection, the stronger the polarization. That means that the mirrors of a telescope can introduce an additional and stronger polarization than the one coming from the Sun, contaminating the measurements (this is usually called instrumental polarization).

The solution devised for the European Solar Telescope consists on an optical path that self-corrects for polarization by placing the mirrors in such a way that the extra polarization is automatically compensated: "EST will have six mirrors. Because of their on-axis reflections, the primary and secondary mirrors do not introduce polarization. The other four are paired in a way that the polarization introduced by each mirror of the pair is the exact opposite of the other, so it cancels out", outlines Collados. The result is the first entirely polarization-free telescope in the world.

An elegant solution to a well-known problem

Instrumental polarization is a well-known problem in solar physics, and different methods have been used to overcome it: most telescopes rely on mathematical models to correct the instrumental polarization a posteriori, while others, like the THEMIS telescope —the first one to specifically address this problem in its design— opt for placing the polarimeter right after their two main mirrors (which, being on-axis, do not introduce polarization because light falls on them vertically, not obliquely).

The solution implemented by the European Solar Telescope is both more elegant and simple, and avoids some of the drawbacks of existing ones, like the additional complications that can arise from placing the polarimeter after the first two mirrors, or the complexity of models used to correct for the instrumental polarization introduced by the telescope (which needs to be calculated for different telescope positions and observed wavelengths and taking into account that mirrors do not behave exactly the same when recently installed and after several months of use).

"Ultimately, you optimize the design for the parameter you're more interested in scientifically. Making the whole design polarization-free is thus more adequate for a telescope whose primary objective is to observe the Sun's magnetic field", concludes Manuel Collados.