'Conducting' the construction of a large solar facility

Telescopes are born out of scientist’s dreams, but translating those dreams into reality is a collective endeavour that can take up to 20 years, and involves not only scientists but lots of other people: engineers, technicians, project managers, finance and operational officers, and industries. Coordinating all those people is a job on its own: indeed, no matter how good the musicians, the orchestra always need a conductor. That is the job of EST Technical Director Mary Barreto. 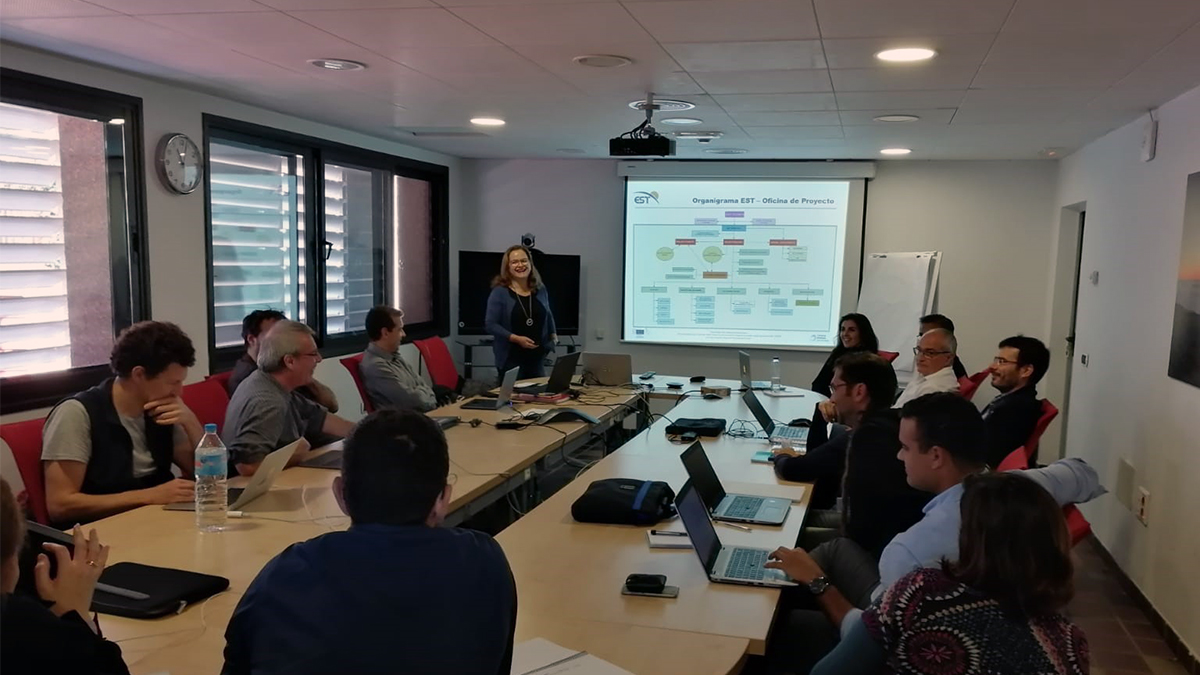 The mission of the personnel working in the construction of a telescope is to make the scientific vision come true... in a realistic, feasible and optimal way.  Whereas the Science Requirement Document is a scientist’s wishlist -pushing for things that, in many cases, do not even exist- the role of the rest of the team is to translate it into something doable in terms of time, money, and overall system integration (without never losing track of the scientific objectives).

Going from idea to reality is a very long process. The European Solar Telescope was first proposed almost 10 years ago, it's now in the preparatory phase, and its construction –starting in 2023– will last another six years. That is, it can take almost 20 years to go from the initial idea to the finished stage. Many people come and go during all this time, working in the project as needed: project office staff (engineers, technicians, project managers, finance and operational officers), in-kind contributions of the EST partners, and private companies. Together they will design, manufacture, integrate and test the telescope to make the dream come true.

Coordinating this taskforce is the role of EST Technical Director Mary Barreto, who joined the project at the end of 2018. Albeit an engineer, she doesn’t consider herself as a specialist, but rather someone with a comprehensive overview of all things pertaining to telescopes and instrumentation, gained during a career of 34 years: "I've learned a lot about telescopes' inner workings, the importance of institutional relations, and the logistics associated with observations during my career. I use this overall experience to coordinate a group of specialised people, making sure they keep the big picture in mind while working on their specific technical or scientific domain", she says.

The importance of communication

Empathy and communication are her biggest assests. "Ultimately, the success of a project comes down to the people working on it. It’s important to support and motivate them so they make the project succeed. If you have brilliant musicians, you can be sure they will play a wonderful melody. However, if they are not motivated or you don’t provide them with a good instrument, the right score, and clear execution guidelines coordinated with those of the other members of the orchestra, they might still be brilliant, but the final melody won't sound so good", considers Barreto. That's why she sees herself akin to an orchestra conductor –the one providing musicians with technical, organizational and execution guidelines so everybody knows their part and performs it in a timely, coordinated and successful manner.

The main EST Project Office advisory bodies –essential for successful and timely communication– are the Science Advisory Group (the group of scientists that authored the SRD) and the Technical Advisory Group, a group composed by engineers and scientists with previous responsibilities in the EST conceptual design, as well as experts in the design and operation of other solar telescopes. The main decisions about the telescope design undergo several iterations, until an agreement that satisfies the equilibrium between vision and feasibility is met.

There is also an on-site Project Office support scientist, which act as a translator between the scientist's visions and the more realistic, down-to-earth approach of the engineers. Also, since traceability (the act of keeping track of changes or modifications in a component, as well as documenting versions) is key in an engineering task like building a telescope, a software tool called cosmoSys-Req has been implemented to guarantee the traceability of the scientific requirements into the final design.

"It's not just about having a list in a task manager and telling people to follow that. It's about gathering information from different sources, analysing it, and deciding what the next right movement is. And then, you communicate that to the team", Barreto points out. "This is a long term project. Coordinating a project for such amount of time is a big challenge. However, the feeling that you get when it is finally built and working... well, that satisfaction is magnificent", she concludes.