SRD: A document to live by

The Science Requirement Document (SRD) is like the bible of a telescope: it lays out the scientific questions that the researchers want to unravel and details all the capabilities they would like the telescope to have. In the case of the European Solar Telescope, that document is now considered to be final, ready to be used to define the technical requirements of the telescope. However, crafting this document is only part of the job. The other is to coordinate with the engineers to assess the feasibility of those demands for the telescope as a whole. 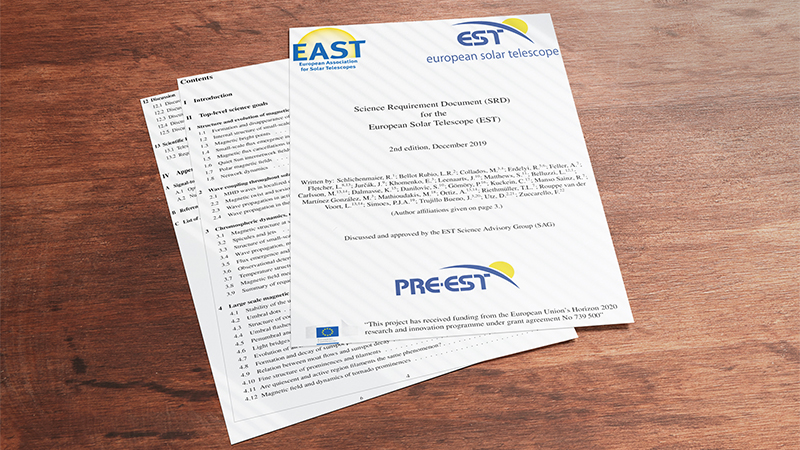 Cover and index of the EST Science Requirement Document

The Science Requirement Document was prepared by the Science Advisory Group (SAG), a team of 23 scientists from all over Europe. The document updates and expands an earlier SRD (approved in 2011), developing the scientific challenges and research questions into "science cases" (you can get a taste of what a simplified science case looks like in our The Science of EST series posts), and detailing the observations needed to solve them.

So, for instance, one of the top-level science goals of EST is to understand the dynamics, magnetism and heating of the chromosphere. The SRD identifies the pressing questions in this area, the science cases they'd like to study; like, for example, the temperature structure of the solar chromosphere (which, for reasons unknown, is hotter than the photosphere). Then, the SRD details which observations would be needed to better understand that phenomenon (in this case, temperature measurements and observations of CO spectral lines), and suggests which instruments could perform those observations, even detailing their specifications.

Besides the dynamics of the chromosphere, the document identifies another seven top-level science goals:

Nevertheless, no matter how detailed the SRD seems, it is important to remember that "the science cases and observations in the document do not cover all the science questions to be addressed by the telescope, but rather span over all the capabilities that scientists would like EST to have", as Rolf Schlichemaier, chair of the Science Advisory Group, points out.

At the end, the SRD —with its detailed observational needs and its demands in terms of instrumentation capabilities— constitutes the scientists' wishlist. However, not all scientists' desires can be met in the same way they were first envisioned: a telescope is a very complex system, and technological design has to be carefully calibrated, since optimising for one trait can diminish another. Technical risks need to be highly assessed. That's why, in order to actually measure the feasibility of the scientists' demands for the telescope as a whole, the SRD is also reviewed by the EST Project Office, a group composed by engineers and scientists with previous responsibilities in the EST conceptual design.

Although a live document (hereby open to be further expanded), the SRD for the European Solar Telescope is now considered to be final and ready to be used by the EST project office to prepare a preliminary design at both system and subsystem levels —one that is detailed enough for construction.