To minimise the effect of atmospheric turbulence, both nighttime and solar telescopes rely on adaptive optics (AO) systems. However, conventional AO systems are not enough for large aperture solar telescopes like EST, so the project engineers are working towards an extremely complex and ambitious MCAO system to provide correction over fields of view as large as 1 arcmin.

The CLEAR multi-conjugate adaptive optics (MCAO)  on the Goode Solar Telescope at  Big Bear Observatory has provided the first-ever MCAO-corrected observations of the Sun that show a clearly widened corrected field of view compared to observations with classical AO correction. /  Schmidt et al.  (2017)

The night sky is full of twinkling stars. However, not only night, distant stars twinkle; so does the Sun, since its light also has to pass through the atmosphere to reach us. The difference is that the Sun is too close for us to usually notice. Nonetheless, telescopes do.

As early as 1665, naturalist Robert Hooke knew that the reason we see stars twinkling was because “small, moving regions of the atmosphere having different refracting powers that act like lenses”.

This difference in “refracting powers” is due to different air densities, which are caused by a difference in temperature: warmer air is less dense and has a lower refractive index than cool air. A difference as small as 1 degree Celsius is enough for the air density to change.

Two air parcels of different temperature create a refractive boundary. This boundary bends light in the same way that the one between water and air (or any other two elements that allow light to pass through). Since the air is usually moving, the effect is similar to looking at the bottom of a pool whose water is rippling. This is called turbulence or high atmospheric seeing, and causes stars to appear blurred and moving when seen through a lens.

In order to minimise the effect of high-altitude turbulence, both nighttime and solar telescopes rely on adaptive optics.

The problem with conventional AO systems

A conventional adaptive optic system (single conjugated AO) consists of three elements: a wavefront sensor, a deformable mirror correcting ground layer turbulence, and a processing unit. The basic principle is this: the sensor measures the incoming wavefront every several milliseconds and, using reconstruction algoriths, the processing unit calculates the ideal deformation of the mirror to compensate for the aberrations. 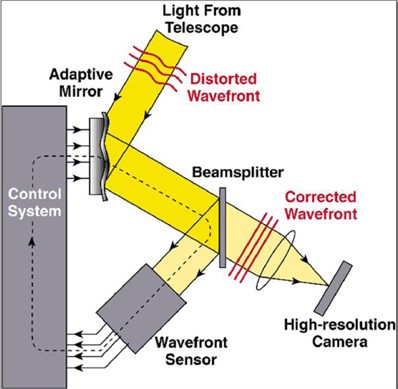 Unfortunately, conventional AO systems tend to provide worse correction away from the center of the image, resulting in a corrected field of view too small for the scientific objectives of big solar telescopes like EST, which intend to observe rapidly changing phenomena spanning over large regions, such as pores, sunspots, or solar granulation.

Other challenging conditions for implementing adaptive optics in solar telescopes are the stronger and much more variable daytime seeing (compared with the seeing at night), and the fact that observations are mainly carried out at visible wavelengths.

MCAO: a new and challenging development

EST scientists and engineers are pursuing a much more ambitious approach from the beggining: “We’re aiming for a corrected field of view of 1 arcminute and very high optical quality [Strehl ratio of 40%]”, explains Luzma Montoya, from the Instituto de Astrofísica de Canarias, one of the engineers that have worked in the EST AO design.

The team is designing a MultiConjugated Adaptive Optics System (MCAO). The basics are the same as the conventional AO systems. However, this configuration adds more deformable mirrors to the setting, increasing the quality of the correction in a wider field of view.

The EST MCAO is intended to use five mirrors conjugated at 0, 5, 9, 12 and 20 kilometres of altitude (turbulence above 20km is almost inappreciable).  The measured aberrations will be distributed among the five deformable mirrors, so as to correct as much wavefront aberrations as possible and minimise the remaining seeing.

“Some error is inevitable because, even though the turbulence is continuous, we can only have a finite number of mirrors to account for it” —explains Montoya. Even space telescopes have residual wavefront errors, although they are much smaller (HINODE has a Strehl ratio of 0.7).

This five-mirror MCAO system is a very ambitious and extremely complex development. As a matter of fact,  there is no MCAO system currently in use with so many mirrors in neither solar nor night-time telescopes.

At the moment, engineers are designing the system based on simulations, although a testbed is being built in order to prove the concept.