Coronal dimmings - the "footprints" left in the solar corona by coronal mass ejections - seem to link both coronal mass ejections and flares, indicating that they are different manifestations of the same magnetic process. Hence, coronal dimmings constitute an importal diagnosis tool to investigate the magnetic topology of solar eruptions. A post written by Dr. Karin Dissauer, from University of Graz (Austria). 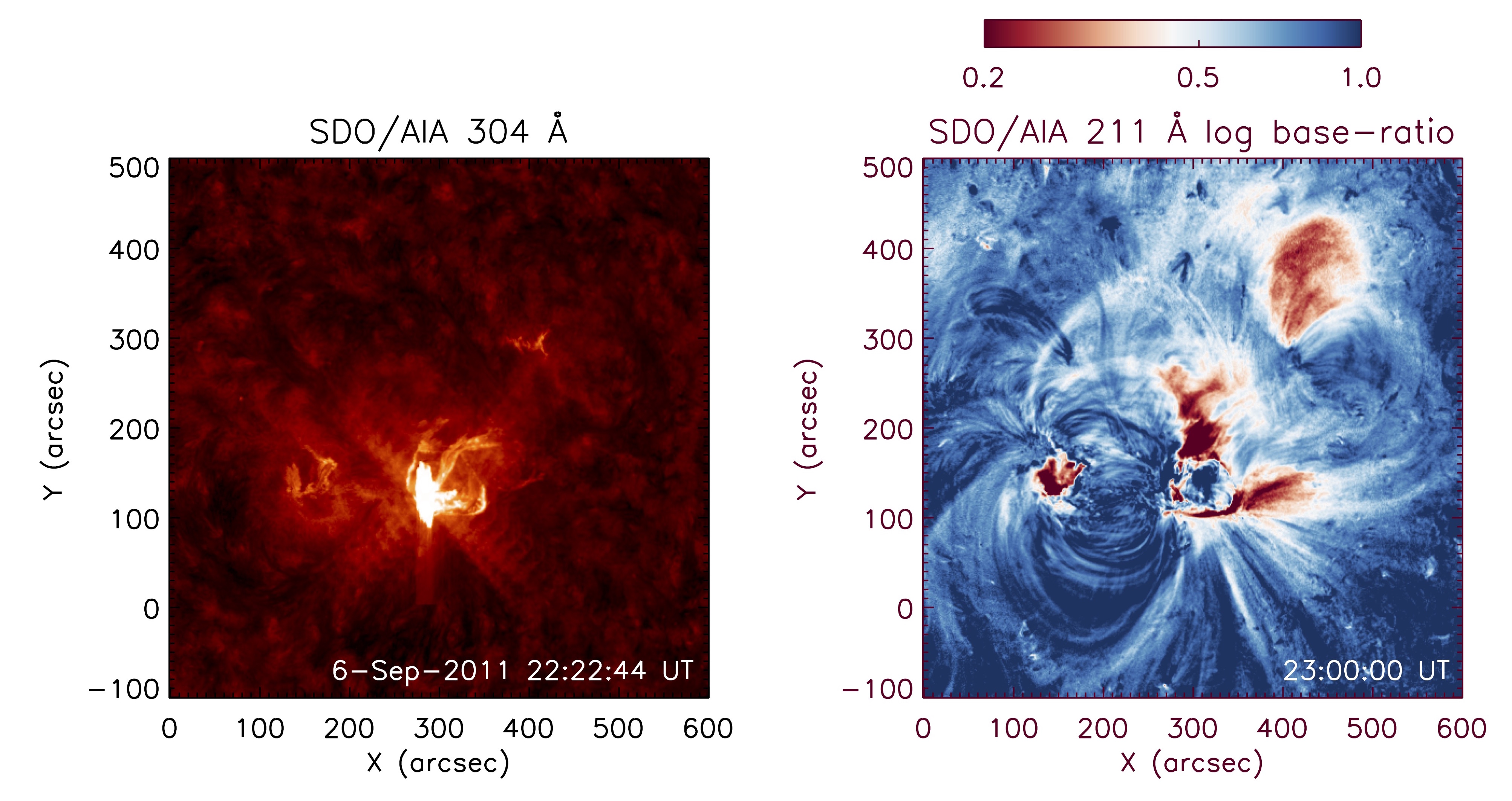 Example of flare ribbons and coronal dimming regions observed during an X2.1 flare/CME event on September 6, 2011, illustrating the evolution of the event in the low corona and chromosphere. To increase the visibility of coronal dimming regions, logarithmic base-ratio images are used. Regions with moderate intensity decrease appear from lightblue to white, while regions of strong intensity decrease (>50%) are shown from white to red.

When coronal mass ejections (CMEs) are expelled from the Sun, they leave a footprint low in the corona in the form of coronal dimmings. Coronal dimmings are traditionally observed as decreased soft X-rays and extreme-ultraviolet emission, but in rare cases their signatures are also seen in the chromosphere in Halpha. In general, their formation is interpreted as density depletion due to the plasma evacuation during the eruption. Dimmings usually indicate the footpoints of erupting flux ropes or mark the overlying fields that are stretched and expanding before and during an eruption.

We recently showed that the magnetic flux involved in coronal dimming regions is on the one hand statistically related to the mass of the associated CME observed in coronagraphs later, and on the other hand comparable to the newly reconnected flux, estimated from flare ribbons observed in the chromosphere. Therefore, coronal dimmings seem to link both CMEs and flares, indicating that they are different manifestations of the same underlying magnetic process.

In combination with flare ribbon observations, coronal dimmings represent an important diagnostic tool to investigate and understand the magnetic topology of solar eruptions, especially since their fine structure and locations could provide additional information on the different flux systems involved in the eruption. The high-spatial resolution and the multi-wavelength capabilities of the European Solar Telescope will allow us to observe these phenomena in unprecedented detail and will provide us with new opportunities to study the topology and triggering of solar eruptions.
For further details, see Dissauer et al. 2018, ApJ, 863, 169 and Dissauer et al. 2019, ApJ, 874, 123.